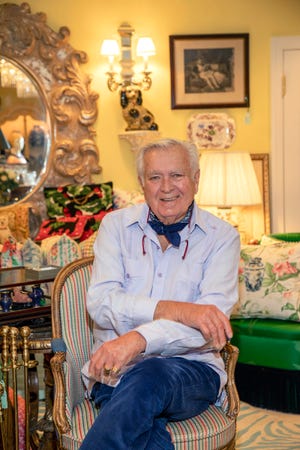 Everyone knew Carleton Varney, it seemed.

From presidents and vice presidents, to movie stars and everyone and anyone in the decorating business, Mr. Varney was known and loved by so many.

“He was always a quick guy with a story,” said Roger Everingham, who was general manager of The Colony when Mr. Varney oversaw a redecoration of the property. “He seemed to know everyone in the world — movie stars, and everyone else.

“He was really a light that brought joy to so many people.”

Mr. Varney, who wrote the popular Your Family Decorator column for the Palm Beach Daily News for more than 40 years, died  Thursday, July 14, 2022, at a hospital in Palm Beach Gardens. The internationally known interior designer was 85.

His columns about decorating — and many other topics, including his travels — revealed not only his depth of knowledge but also his genuine regard for people. He treated his readers as personal friends with whom he enjoyed a weekly chat, and his gentlemanly grace was always apparent.

“I so looked forward to reading his articles in the Shiny Sheet,” wrote one reader after his death. “He made a big difference in this paper that we all love so much.”

Nicknamed “Mr. Color” for his liberal use of what he called “happy” and “magical” colors in his decorating projects, he preferred the same bright hues as his decorating mentor, the late Dorothy Draper. He joined Draper’s firm in 1961 and bought it a few years later.

His work included commissions for hotels, stores, residences and many projects in Palm Beach, where he made his home over the past several years.

In addition to The Colony, his island projects included overseeing the restoration of the Circle Dining Room at The Breakers and The Brazilian Court.

Also, he was chief decorator for The Greenbrier, the venerable resort in White Sulphur Springs, West Virginia; was the head decorator at The Grand on Mackinac Island in Upper Michigan; was a White House decorating consultant during the administration of President Jimmy Carter; and decorated homes for the Carters, and vice presidents Walter Mondale and Dan Quayle.

He decorated homes for such Hollywood and Broadway legends as Joan Crawford, Judy Garland and Ethel Merman; he also authored more than 30 books on decorating and other subjects.

But for all his success in the business world, family came first for Mr. Varney.

“He cared about people and was just there for them when they asked for help,” his son Sebastian said. “I knew it before, but the response I’ve gotten (since his death) has shown me how much of an impact he had on people’s lives personally as much as he did as a designer.”

Thank you, Carleton. You will be missed.