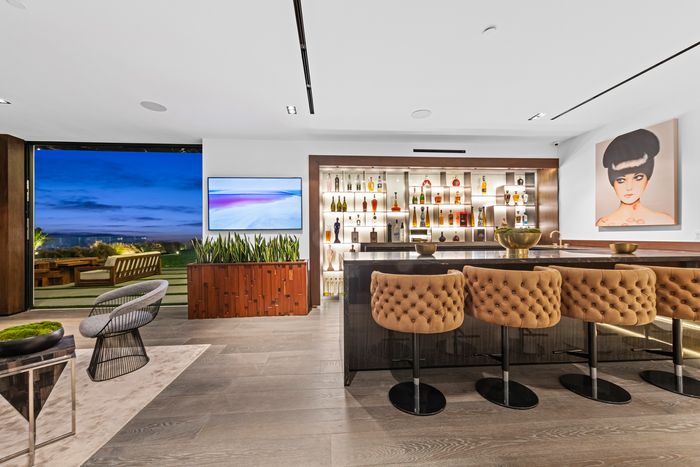 Eric Overholtzer
was intrigued by the concept of nonfungible tokens, or NFTs, but found it hard to wrap his mind around them. So, he bought one.

“There were three NFTs in a gallery by Angel Baby and one had this whimsy to it, so I purchased it,” says Overholtzer, a Los Angeles-based interior designer and custom furniture maker.

While NFTs and digital art have taken the art world by storm, the new challenge for NFT collectors is where and how to display their new pieces.

“Even though it’s always moving and is kind of frenetic, I find a calming aspect to this piece that’s almost meditative,” Overholtzer says. “I used to have a fish tank in a loft I owned, and I loved the movement and the glow. This reminds me of that.”

Overholtzer placed his digital art in the living room so that it’s the first thing anyone sees when they walk into his West Hollywood home. “I live off Sunset Boulevard, so I’m used to sound and light from outside,” he says. “For now, I leave it on 24/7, but when I travel, I can turn it off with a switch.”

The quick embrace of digital art and NFTs over the past year has caught the attention of real estate agents, builders, and home stagers who are always looking for new ways to attract potential buyers.

“NFTs aren’t changing the scope of the sale but do draw attention to those that may be in the market for a new trophy property and the one-of-a-kind NFT collection that comes with it,” says
Mauricio Umansky,
CEO and founder of The Agency, a real estate brokerage in Los Angeles.

The Agency recently listed the Palazzo di Vista estate in the Bel Air neighborhood of Los Angeles for $87.8 million. It features an NFT art gallery curated by MDP Art Curators that includes works by Ghost Girl and BigHead music producer.

Digital art is both a passion and a marketing tool for
Phillip Braunstein,
an art collector and president of Los Angeles-based Colossal Properties, who recently sold a Hollywood Hills speculative house that includes seven digital art screens for $14.9 million.

“I’ve always included high-end art installations in the homes I build, so I decided to display some of the 500 NFTs I own in the Hollywood Hills house,” Braunstein says. “What’s different about NFTs is that you can see them on your phone or computer, or you can rotate them on screens. But if you own 500 paintings, most of them will have to be kept in storage.”

New York City-based ASH Staging is currently acquiring NFTs to install at some of their staging projects in Los Angeles and New York City, says
Andrew Bowen,
a partner and head of staging for ASH, which does ​​high-end staging for model homes and individual sellers, and interior design work.

“I don’t know that digital art will dramatically change interior design, but it offers a kinetic activity that’s new,” Overholtzer says. “There’s a movement and a flow that’s different from other types of art and you notice something new as it loops around so that it’s like owning multiple pieces of art.”

When
Kipton Cronkite
purchased his first NFT, it was an accidental choice to place it in a frame next to the television in his Los Angeles living room.

“I put it there because it needed an outlet and that was a convenient spot where the cord could be hidden,” says Cronkite, founder of ArtStager, a Los Angeles-based art curation and advisory firm. “It turned out to be perfect because I keep the video on a loop and find that I notice it more when I sit down to watch TV, instead of trying to stand and look at the screen for four hours while it scrolls through the loop.”

Architects and interior designers frequently take a homeowner’s art collection into consideration to make sure there are appropriate walls or niches and the right lighting to highlight the artwork. Today, art collections that include digital art are likely to need dim lighting, an electrical outlet, and Wi-Fi instead of well-lit wall space.

Many NFT owners opt for a frame for their stationary or video art so that it more closely resembles physical art rather than displaying it on a screen, Cronkite says.

“If you own several NFTs, you can experiment with multiple frames or try a triptych that can display different content from various artists in each section,” Cronkite says.

Braunstein opted to display some of his NFTs on Meural Canvas frames by Netgear, which he plugs into a recessed outlet behind the screens.

“Netgear’s software connects to your NFT wallet to check that you really own the image you want to display,” Braunstein says. “One drawback of those screens is that they don’t have sound, so other companies are developing screens that can handle audio files.”

Displaying digital art in direct light isn’t ideal, says Braunstein; one lighting option is to use soft backlighting around and behind the frame to create ambient lighting while highlighting the art, Cronkite says.

A digital art display with a moving video or that’s backlit can become a source of light in a room, so Bowen warns that homeowners want to be conscious of that impact in a bedroom or another space where you don’t want to introduce too much light. The Netgear screens can be always on or placed in night mode, Braunstein says.

Unlike some smaller traditional paintings or sculptures that might be slightly hidden by a lamp or placed on an elaborate credenza, digital art is more likely to be placed in a visible location purely because of their newness, says Bowen.

“On the other hand, unlike traditional art collectors, some NFT owners aren’t displaying their art at all,” Bowen says. “Some people are displaying them on their computer screen, which makes them essentially a very expensive screensaver. But over time I think we’ll see people get more creative and find ways to incorporate them into mirrors and even project them on walls.”

While it’s natural to consider digital art as part of a contemporary home, it’s possible to juxtapose digital images and videos with other types of art in a more traditional home, Cronkite says.

“You can display digital art side by side with analog art to complement the aesthetics of both kinds of work,” Bowen says. “I can see architects finding opportunities to create display areas for digital art in homes in the future.”

This article appeared in the June 2022 issue of Penta magazine.