Prep Rally: Here is what we have learned from summer 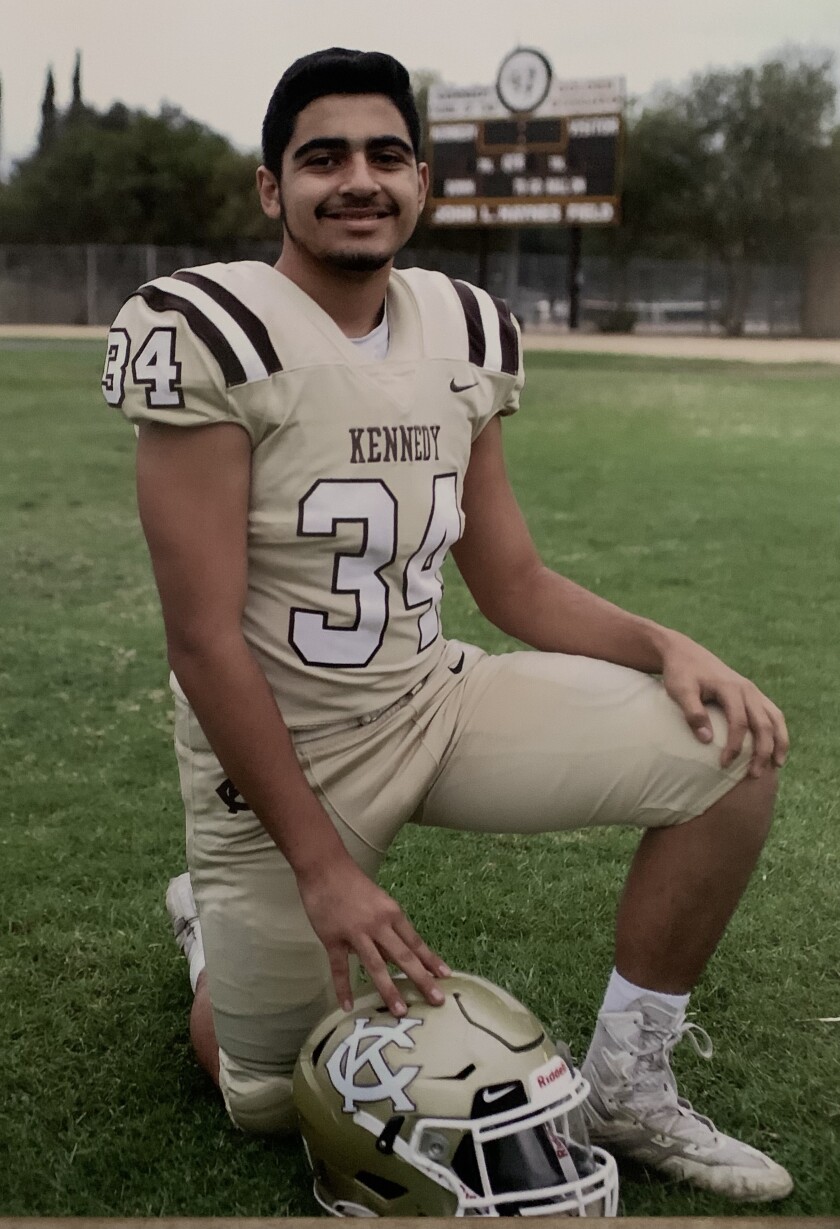 Hi, and welcome to another edition of Prep Rally. My name is Eric Sondheimer. Saturday was quite a day for summer football across the Southland. Mission Viejo thrust its way into the conversation by knocking off St. John Bosco and Mater Dei in consecutive seven on seven games to win the Edison tournament.

There were no linemen, no pads and no one saying the preseason rankings should be reshuffled after Saturday’s seven on seven Battle at the Beach tournament at Edison, but Mission Viejo made a huge positive impression behind quarterback Kadin Semonza and its talented group of receivers led by Mikey Matthews, KJ Reed and Jackson Holman.

If there’s one thing that was learned, put Matthews in the conversation for best receiver in the Southland.

Here’s the report from Edison.

Another big tournament will be taking place on Saturday at Mission Viejo.

Corona Centennial is usually in the Edison tournament but a scheduling mixup prevented the Huskies from coming. Instead they won the Temecula Valley tournament. They will be at Mission Viejo on Saturday.

West Torrance went 5-0 at the Redondo Union tournament. Here’s a report on the improvement in a team that was 4-8 last season and 2-8 in 2019.

Getting City Section coaches to return forms sometimes is as difficult as getting someone to visit the dentist, so let me reward those who take the moment to publicize their players.

First up is Los Angeles High and coach Anthony Jackson.

He has a junior offensive tackle, 6-foot-2, 282-pound Aren Barajas, who is just learning the game but has potential. He joined the team late last season and didn’t play much, but Jackson thinks this season will be different.

“This kid is big, strong and coachable,” he said.

The key player for the Romans will be Malike Simpson, a receiver-defensive back who scored 15 touchdowns last season. Brian Elvira, a junior center and defensive tackle last season, has turned body fat into muscle and is switching to fullback and middle linebacker. He had 65 tackles as a sophomore. Defensive lineman Arturo Arguello had four tackles for losses as a freshman.

The Romans will be aided by two transfers, running back Allen Harry from Rancho Dominguez and quarterback Shawn Pringle from Hawthorne.

The Romans will have the challenge of having no home football games this fall. They are supposed to be getting a new field and new bleachers.

With 12 returning starters from an 8-3 football team, Granada Hills Kennedy coach Troy Cassidy is excited that the Golden Cougars are going to be Valley Mission League title contenders. Better depth will be a strength.

Gor Abrahamian, a running back-receiver, and Gabriel Argott, a running back-linebacker, are the two most important Kennedy players. Both are three-year varsity players. Experience on the offensive line should help both make major contributions running the ball.

After several years of dwindling numbers for players coming out for football, there are early signs of a reversal.

Loyola has 140 freshmen participating in practices, up from 92 last year. Granada Hills Kennedy has 115 varsity and lower level players, up from 74. Crespi has 50% more players coming out. Los Angeles Lincoln has 50 players practicing, up from 35.

But not all numbers are good. Crenshaw coach Robert Garrett said he had 22 players out of football and not a single incoming freshman is practicing.

There’s hope that junior varsity programs severely disrupted by COVID-19 obstacles will be returning to help build back varsity rosters.

Loyola coach Drew Casani is pretty excited about a trio of linebackers he’ll be turning loose this fall.

Scott Taylor, the son of former Stanford cornerback Brian Taylor, sure looks the part of a future star. The 6-foot-2, 215-pound sophomore has been a top club soccer player but is giving that up to focus on football and high school soccer. He’s related to the Klein family, Bob Klein and Jimmy Klein., and his grandfather is former Loyola principal Bill Thomason.

Get ready for the SoCal boys to be making an impact for Stanford on offense this fall.

Receivers Michael Wilson (Chaminade) and Brycen Tremayne (Venice) are finally healthy and set to play together. Add receiver Bryce Farrell (Oaks Christian) and you can understand the excitement from quarterback Tanner McKee (Corona Centennial) getting the chance to show how good the SoCal boys are.

Tremayne, who suffered a broken fibula and dislocated ankle last fall, didn’t compete in spring ball but has been cleared to return and said he’s thrilled to finally join Wilson as a top pass-catching duo.

Watch out for Zevi Eckhaus

Zevi Eckhaus did everything but carry the water bottles during his time playing quarterback at Culver City. He passed for so many yards and so many touchdowns that his records will be hard to break.

He’s continued his success at Bryant University in Rhode Island. Last season as a freshman, he was the NEC Rookie of the Year, passing for 2,634 yards.

Eckhaus is known for his great work ethic, so watch out for him this fall.

Reggie Morris Jr. has resigned as boys’ basketball coach at Fairfax, another blow to the prestige of City Section basketball. The section’s all-time winningest coach, Ed Azzam, retired at Westchester more than a year ago.

There had been discussions all summer about Morris leaving Fairfax and going back to Redondo Union, where he once coached. He resigned on Thursday and Fairfax started advertising the position on Friday.

Fairfax has been considered one of the best coaching positions. Harvey Kitani and Steve Baik were the most recent coaches for the Lions. Kitani, Baik and Morris all guided teams to City championships.

Loyola’s brother combination of Blake and Thatcher Fahlbusch were spectacular and aided by Mira Costa’s Akea Gealon and Andrew Chapin. Loyola’s Simon Katz was named MVP of the tournament.

The girls’ AAU Junior nationals in beach volleyball came to Hermosa Beach over the weekend.

Twins Tawny and Skylar Ensign from Mater Dei are two players to watch for this fall.

The team of Erin Inskeep of Mira Costa and Clara Stowell of Esperanza made it to the championship match for 18U before falling in the final.

Madison Foxhoven of Viewpoint has committed to Duke for women’s soccer. . . .

The sons of LeBron James and Carmelo Anthony are expected to face off in a basketball game next season matching Sierra Canyon and Christ the King 20 years after their fathers played each other in a high school. game . . .

Andrew Aguailar has resigned after nine years as girls’ soccer coach at Oxnard. . . .

Kelly Prouty has been named cross-country coach at Edison. . . .

St. Francis has picked up a top senior transfer student at running back in Devyn Turner, who played last season for Allen High in Texas. . . .

Los Alamitos has added another transfer student in defensive lineman T.A. Cunningham, a top prospect from the class of 2024 who played in Georgia. . . .

Saugus outfielder Zach Plasschaert, an Arizona commit, has been selected to participate in the Future Stars Main Event at Fenway Park in September.

From the archives: Pete Kokon

Pete Kokon graduated from Van Nuys High in 1932. He used to pick strawberries. He became a sportswriter, covering high school sports in the San Fernando Valley for more than 60 years until his death in 1998 at the age of 85. He was found in his living room with the TV set tuned to ESPN.

There are so many stories to tell about Kokon. He owned an apartment building in Sherman Oaks and lived in the penthouse. He was quite a character. He never locked his door at night. He left his car keys under the floor mat, never locking his car. He was a member at Woodland Hills Country Club and would shout his membership number for all the hear when ordering a meal. He loved golf. He loved going to the race track. He loved boxing. But most of all, he loved writing about high school athletes, first for the old Valley Times, then the San Fernando Sun.

He’d write his stories on a Royal typewriter in his apartment. He used to pay me $15 for a weekly story while I was in high school. He knew Bob Waterfield, Don Drysdale and anyone and everyone.

Here’s a wonderful profile from 1990 on Kokon’s legendary life. He’s a candidate this year for the City Section Hall of Fame.

From the Los Angeles Times, an editorial criticizing the Supreme Court decision allowing a coach to pray with football players.

From Scorebook Live, a story looking at what the resignation of Alonso Arreola at Reseda says about LAUSD sports.

From Runnersworld.com, a story on a community effort to rebuild Los Angeles High’s track.

From the Los Angeles Times, a story on how USC quarterback Caleb Williams got a head start on building an NIL empire.

Did you get this newsletter forwarded to you? To sign up and get it in your inbox, click here.