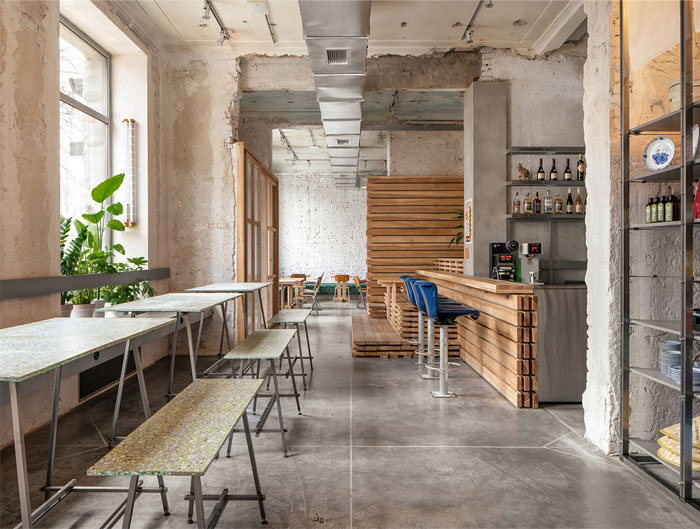 MAO is a restaurant specializing in Chinese cuisine in the center of Kharkiv, with simple and authentic dishes from a Chinese head chef. The restaurant is located on the ground floor of a ‘Stalinka’ style building, in a lively location near a central metro station. The MAO spans 358 square meters. Indoor seating is designed for 80 guests, while outside seats 40. The owner of the restaurant is well acquainted with the culture and gastronomy of China. According to his plan, MAO was to become an authentic Chinese place: with Chinese chefs, equipment and packaging shipped directly from China, as seen in local cafes.

balbek bureau: Our team’s task was to create an authentic design project that would match the spirit of MAO. The interior needed to be simple and casual. Among the areas we worked on were an open kitchen and a take-away area where you can buy Asian goods and place orders to go. In addition, the customers were presented with truly unique seating formats. 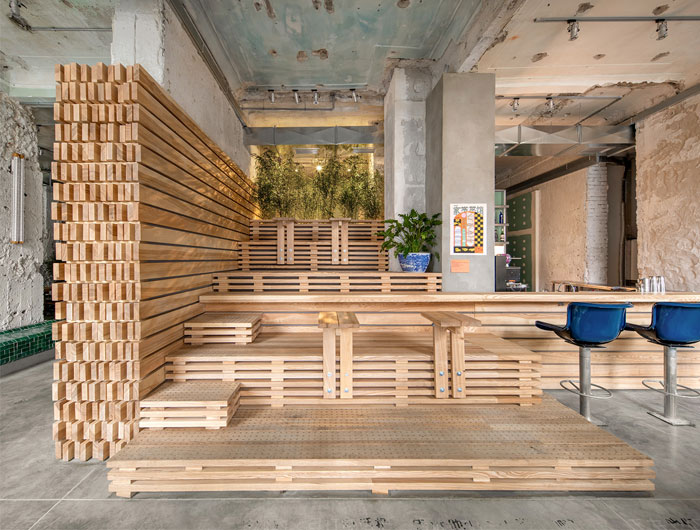 The restaurant’s mascot is Mao, a young man from Yunnan province in southern China. Yunnan is a region famous for its diverse nature: mountains, jungles, rice and tea plantations. According to legend, the Mao family moved from there to Kharkiv and came up with the idea to introduce locals to Chinese cuisine. The family built the restaurant themselves, using modest funds but with the fondest memories of their native China.

We fell in love with the legend of Mao and brought it with us into the design concept. There are many hints of unfinished DYI renovation in the interior: open plasterboard, unframed mirrors, wooden boards stacked in the fashion of construction hypermarkets. The bamboo mezzanine also refers to construction aesthetics: bamboo scaffolding is often used in China to construct buildings, and even skyscrapers. 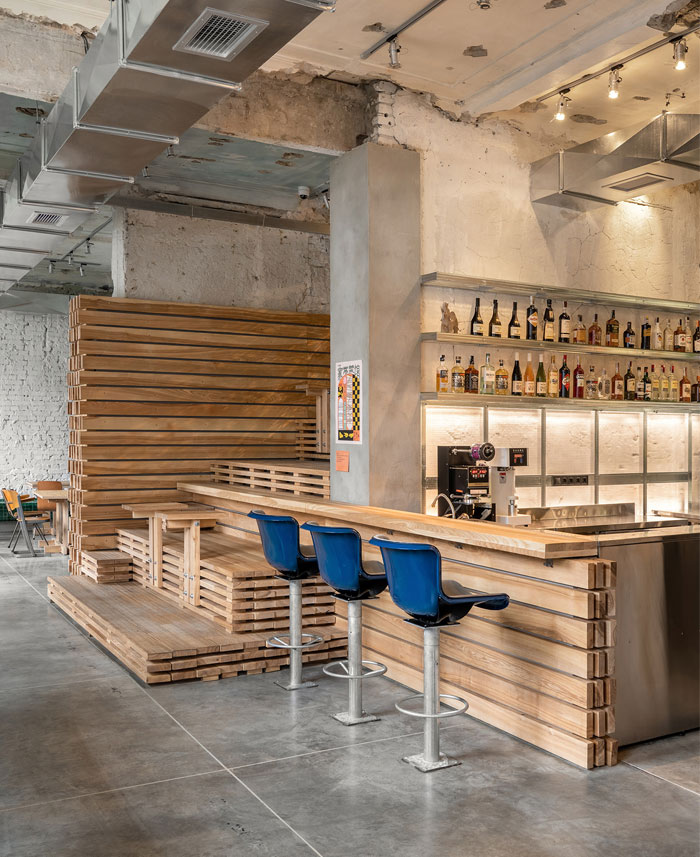 Many Asian cafes are inspired by Chinatown decor: neon signs, red lights and other attributes customary to these neighborhoods. Our team, on the other hand, tried to distance itself from the image of the city and sought inspiration in the rural landscapes of Yunnan. We decided to let nature in: planted live bamboo, placed pots of plants along the picturesque windows and zoned the space with a winding emerald green bench. These attributes upheld the concept of environmentally friendly solutions, such as recycled plastic furniture and scrap canvas awnings.

We designed an amphitheater made of wooden planks directly in front of the entrance. This serves as an alternative to the more standard that is usually located by doorways, which is often uncomfortable. In this area, guests can wait for their take-away order or have a quick coffee. In the warmer months, when the front door is kept open, this atypical seating serves as a focal point for passers-by. The amphitheater is part of a large architectural volume that zones the space of the restaurant. This volume starts from the wooden countertop of the bar, flows into a multi-level staircase, and then smoothly transitions to the wall panels and door. These panels then lead to the bathroom area, where the volume ends with the custom-made sink. 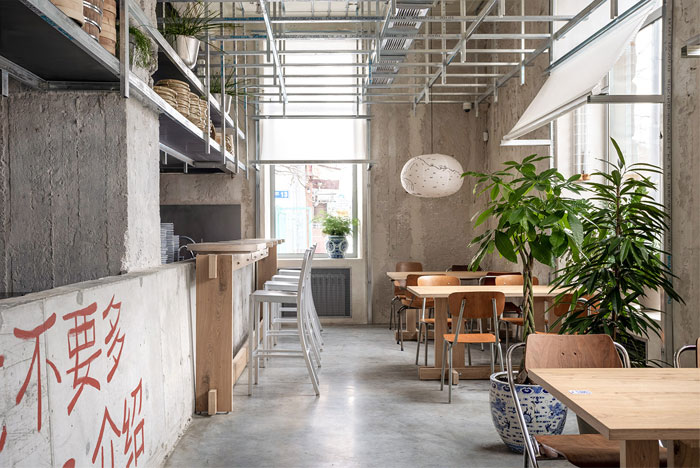 To the right of MAO’s entrance begins the first hall, the center of which is a contact bar with seating designed for three people. Its wooden countertop is a continuation of the amphitheater. Chairs near the bar are upcycled stadium seats sourced at a flea market, to which we welded brand new legs. Bar shelves and partitions were constructed of plasterboard and aluminum profiles. To protect the drywall from splashes, along the perimeter of the work area we provided an apron of reinforced glass. Seating by the windows consists of custom-made tables and benches. Countertops and seats are made of recycled plastic bottle caps. 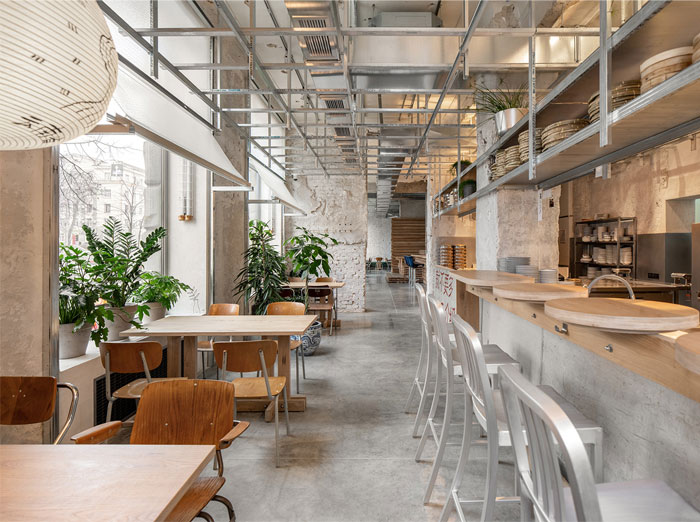 The client wanted to locate an open kitchen in place of the amphitheater, but we persuaded him not to divide the work area into two separate blocks and base the open kitchen next to the technological area. Eventually, the second hall became the most popular among the diners: people book seats near the theatrical kitchen and watch the cooking process with fascination.

To the left of the amphitheater begins the third, largest hall. A focal point of this area is a 30-meter emerald green bench that snakes across the room and wraps around each of its columns. Custom tables seating two and four guests were set up along the bench. They are fixed to the floor but can be grouped thanks to their unfolding countertops. For example, three tables, two of which are equipped with such countertops, are easily combined into one large table. Vintage chairs were placed at the tables, which were sourced at flea markets for the entire restaurant.

Green areas with live bamboo were placed between the columns. The greenery added a sense of comfort to this area and at the same time improved the acoustics of the room. Since the interior is full of smooth and dense materials, there was a lot of noise and echo before the plants were set in place. 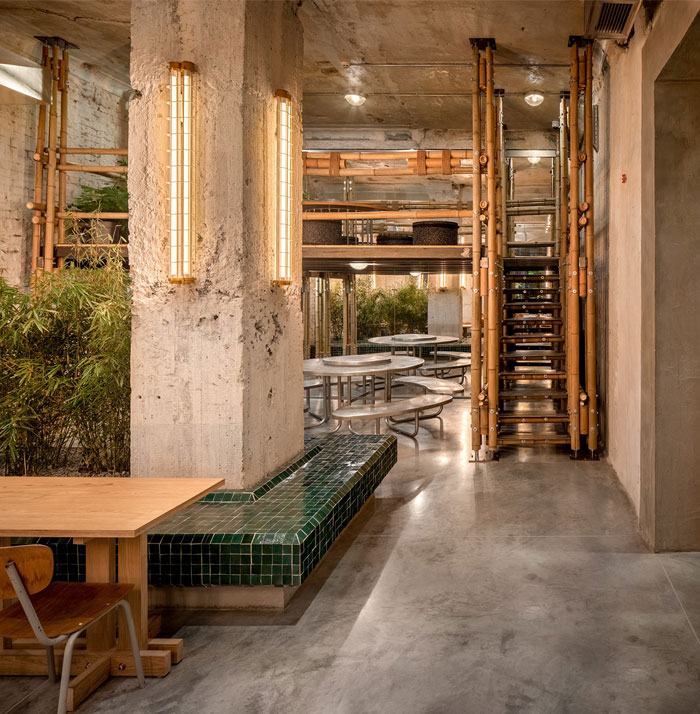 A dominant feature of the space is a bamboo mezzanine in the far part of the hall. Under the mezzanine stands a round table seating from 8 to 12 diners, made of perforated metal, modeled on classic outdoor picnic tables. A Lazy Susan, traditional in Chinese restaurants, was mounted onto the picnic table. On top of the mezzanine stands another round table of the same diameter, also equipped with a Lazy Susan. As the second level is shorter in height, lower seating with custom-made poufs made of rolled foam fixed with an industrial tie belt was placed by the table. 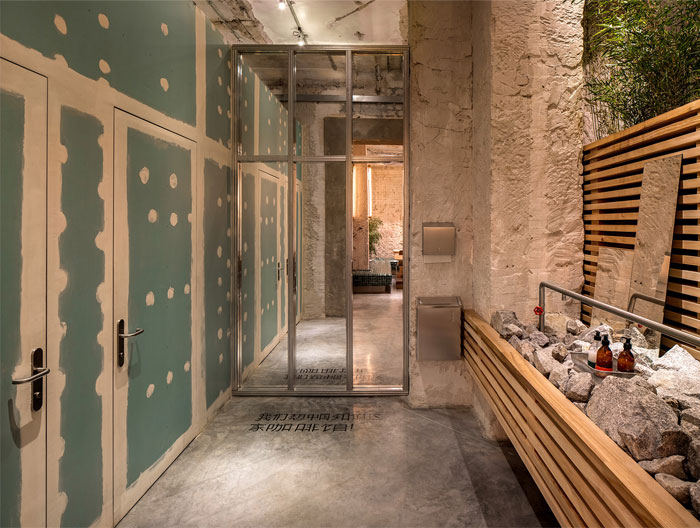 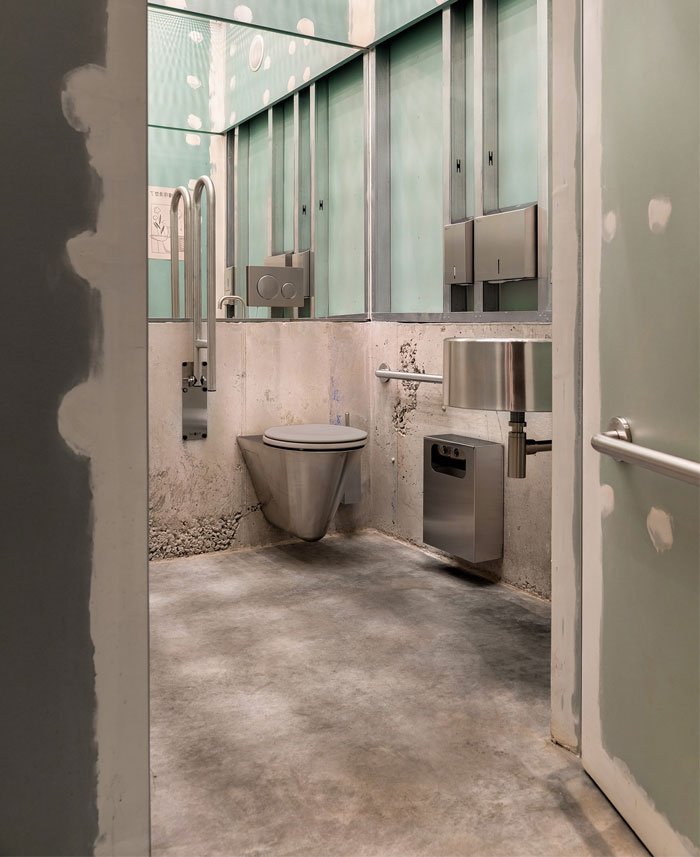 7 Clever and creative ideas for the most graceful corner

All About Shade Trees

7 Clever and creative ideas for the most graceful corner